Register as an Individual, Join a Team, or Start a Team! 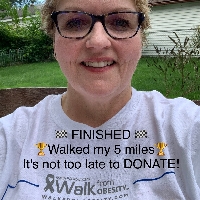 This is ME writing out my personal plea for everyone who reads this to  PLEASE HELP ME reach my fundraising goal for this very important cause!  Believe it or not $1 would be helpful because that adds up quick!!! I have over 500 LinkedIn connections, so if my LinkedIn community just gave $1 each, I would be soooo close to my goal.  I am also reaching out to my family, friends and coworkers who are not on LinkedIn but are on Facebook.  Since I am NOT on Facebook (nor do I ever want to be again) it makes my outreach very limited.  I would be most grateful if you could not only help me with a small donation, but to share my page for this fundraiser on FB too.  I KNOW this goal IS ACHIEVABLE!!  If you're embarrassed or think I would be offended by a donation of $1, you are totally wrong!  I would graciously accept ANY AMOUNT of monetary help that I can get to reach this very important (to ME) goal that I set out to raise a total of $913 in donations (I'm already at $200!!!). You can even choose to have your donation made anonymously so your name won't be associated with a $1 donation, but then I will not be able to send you a personal thank you.

Okay, I'm gonna get VERY personal now.  I really appreciate all of you who are still reading this far, because I'm putting my heart out on my sleeve now to let you know why I want so badly to reach my goal.

The reason the number 913 is very special to me, is because that is the exact time (9:13) when my only sister Mary Kay passed away at 16 years of age.  It was shortly after a tragic vehicular accident she was in, when a tractor-trailer hauling steel hit her vehicle at an intersection, literally pushed it into into a cement curb and light pole, which made her vehicle stop (My Mom's AMC Gremlin) but the truck continued over top of her vehicle, getting it stuck sideways, between the trucks cab and trailer.  I was only 13 at the time.  I'm sure you can imagine how my life as I knew it had forever changed without her in it after that.  I had no idea how strong my faith in the Lord was until later in life, because at the time I was never 'mad' at God or asked 'why' like most people naturally do.  To this day, I truly believe God would have prevented that accident or had her survive if it wasn't her time to go be with the Lord.  He even blessed us with the gift of her still looking beautiful so we could have an open casket.  The only visible external injury was a large goose egg on her forehead.  I say blessing because there were many that day, even the way she died. Simply watch the local or national news to see how many more horrific ways a person can die.  She didn't get attacked, she wasn't shot, she didn't commit suicide,  it wasn't a long drawn out painful terminal illness where we all had to suffer more and wonder how much longer we would have her on this earth.  The accident happened on April 14th at 12:03pm and she passed away at 9:13 the next day.

Mary was not only my sister, she was a "second Mom" to me after my parents divorced. She was the oldest and had to be in-charge of my brother and me after school until Mom came home from work.  This was no easy task for her!  She would have to keep reminding us to do our chores before Mom came home and we were rebellious little brats that totally gave her a hard time with anything and everything.  I used to push my knee socks down to my ankles just because it bugged her to see them squished down like that.  Mary was my Mom's right arm, being her first born.  She would help Mom out a lot, even making dinner for everyone once in a while.  Hamburger Helper lasagna was always my favorite.  She would surprise Mom with sweet thoughtful little crafty things.  She'd bring her a snack out of the blue when she could tell Mom was stressed and needed extra love after a hard day at work.

To this day, I truly believe God would have prevented that accident or had her survive it if it wasn't her time to go be with the Lord.  He even gave us the gift of her still looking beautiful, allowing us to have an open casket.  She only had one big goose egg on her forehead, but her internal injuries were too massive to overcome.  I say that God gave us a gift/blessing because believe it or not there were many during that time.  Even though it was a horrific accident, I still feel it was a blessing in how she died.  Simply watch the local or national news to know people die every day in so many more unimaginable ways... She wasn't shot and killed, she didn't go missing or get kidnapped, raped, or tortured. It wasn't a suicide, or a long drawn out painful terminal illness, etc...  It was an injury accident that happened on April 14th at 12:03pm and turned fatal when she passed away the very next day.  It was during Easter weekend, the holiest of holy days in Christianity when we laid her to rest.  What an honor to be called up to Heaven at that very time.  There was even closure for me in her passing.  I remember the terribly somber feeling from the whisperings of Mary would surely have brain damage and be paralyzed if she even survived.  She excelled in school as a straight "A" honor student.  Even in kindergarten they had to move her up to the first grade because of how advanced she was.  She was in Junior Achievement learning business sense by making and selling products, she learned to sew in Home Economics class and I would go with her to Joanne Fabrics to pick out patterns.  She played the flute in marching band, she was an altar girl in church, she already started applying to colleges.  She was a daughter, a sister, a grand daughter, a niece, a cousin, a best friend, a student.  She was shy with the boys she had a crush on so she never had a chance to have a boyfriend. She became a God Mother after being asked at her very young age.  She had so much GOOD to offer this world!!!  She was literally on her way to volunteer at a party for special needs children, after stopping at my Mom's work to surprise her by dropping off a bagged lunch, then directly afterward, at 12:03pm the continuous sound of an air horn as the signal turned red at the intersection, the earth shattering force of the crash, glass breaking, crunching metal against metal, the scraping of her vehicles being pushed into the curb, then stopped suddenly by a light pole, only to have the semi-truck continue its forceful forward momentum right over her small vehicle, getting it completely smashed in between the cab and trailer.  Once the vehicles finally stopped moving, the world as we once knew it came to a screeching halt...

The sound of breathing machines forcing air into her collapsed lungs and the beeping of her heartbeat on the monitor were the last signs of life we would see in her because her body was so destroyed inside.

All donations are tax-deductible as the ASMBS Foundation is a 501c3 nonprofit organization.   Please make a donation today!

Thank you for your support!

Get The Word Out